Crepe cake, using the crepes we made during our bootcamp drills, layered between almond cream

Week 9 was a mixed bag sort of week at SFCS Pastry School. It was a week that preceded our second exam, and focused on repetition and speed. All week we did a round of ‘bootcamp’ in the morning: we did the four same tasks each day for a week, with the goal of getting smarter and faster at it by the end.

The tasks themselves were pretty simple: dice one carrot into 1/4 inch dice, make crepe batter and then the crepe, make 8 cones, feed starter. I found that I really enjoyed doing the same things all week because I finally felt like I was getting better at something, like making crepes. By the end, all of the tips of our fingers were ‘seasoned’ (read: burned), we had nearly thriving starters, and we ate a lot of carrots for lunch. By the way, if you haven’t tried, see how hard it is to cut a consistent 1/4 inch dice on a carrot. Report back.

After we finished up bootcamp, we worked on various projects through the week, mostly focusing on macarons and utilizing all the crepes we had been making all week. Macarons are delicate, annoying little cookies that takes quite a bit of work and technique to get right. You can ruin them several different ways, most of which I encountered during the week.

I ultimately got to make them three times, and the last one was finally a success. The first batch was ruined by being baked with several other sheet trays of them in the oven (uneven heat is a big factor in cracking and flaws). The second I ruined by pulling out of the oven too early – an underbaked macaron will get oily on top and flatten. Not pretty. Not Pierre Herme quality! And round three, shown with the yellow macarons, finally worked out. They had cute little feet, round tops, and no oil stains. My hat is off to those that make these regularly and have the technique down pat. Hope 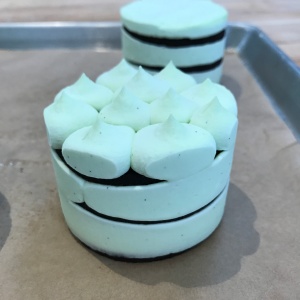 fully I’ll get there one day!

We also worked on a few ice box cakes and other fun little treats. Here’s a grasshopper pie in the works – it’s a homemade oreo cookie layered with a mint mascarpone filling, frozen in a small ring, and then was dipped in chocolate and left in the refrigerator to soften overnight. There was also some s’mores and an ice box lemon pie made with always delicious condensed milk. One classmate made a beautiful macaron cake, filled with a creme brûlée filling and fresh raspberries.

Each of us made three or four crepe cakes throughout the week as well. The first one I made, shown in the highlighted photo at top, was a complete winner with my former coworkers. The crepes are sandwiched between almond cream: I infused milk with toasted almonds, then used th 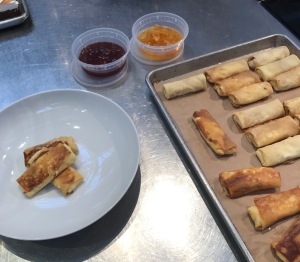 at milk to make a pastry cream that also had a touch of almond extract and vanilla bean paste. Once the pastry cream cooled, I folded in whipped cream. It was heavenly. Once all 20 layers were assembled, it gets chilled for several hours. I took a 6 inch cake ring to clean up the sides, but they get a fun ruffle-ly look if you leave it as is. We also made cheese blintz and crepe suzette, and basically made a lasagna out of them for lunch! I personally loved the exploration of all the different ways you can have fun with crepes.

We also had a few workshops t 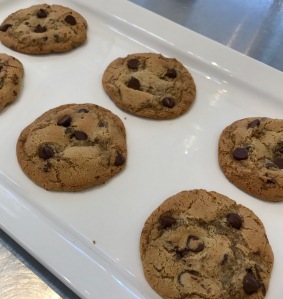 his week, both of which I was stoked about. The first was a Gluten Free workshop, taught by Jeffrey Larsen. He brought along his gluten-free chocolate chip cookies that he developed. Holy smokes, I didn’t know that gluten-free baked goods can actually have nice texture and taste good! I legit went back for another cookie. Other than the texture being only slightly chewier, if you hadn’t told me they were GF, I don’t think I would have guessed.

Jeffrey taught us all about different grains and substitutions for all allergens, such as dairy, eggs, and soy. There are so many natural grains and starches out there that you can play around with, and not even with the goal of making something gluten-free. His workshop showed me that working with AP flour and the likes is only the beginning of the types of ingredients a baker can play around with. Each of the alternative grains have different flavor profiles and lend different textures, so there’s really no reason to not get creative and try to incorporate them in for added flavor or just making something your own.

On Friday, we closed the week with a bread tasting workshop taught by Mike Kalanty. He broke down the flavor and texture qualities of several types of bread for us, and brought in at least eight different types of bread to taste and discuss. To me, this was heaven and a great introduction to our bread weeks in a couple of weeks. He taught us about various

qualities the crumb might have versus what flavor profiles the crust would have. We learned some vocabulary around describing the chew, the grain intensity, and the stickiness of the crumb (or mie). The big takeaway for me was that two people can use the same ingredients and roughly the same process, but get such different taste results depending on how they proofed it, shaped it, etc. Or, how just adding a small percentage of, say, rye flour completely changes not only the flavor but also the texture. These were things I think we all know if we think about it, but you don’t really wrap your head around just how much these things impact the final product until you do an exercise like this. Mike is coming back in a few weeks to teach two days of our class on sourdoughs. I can’t wait!