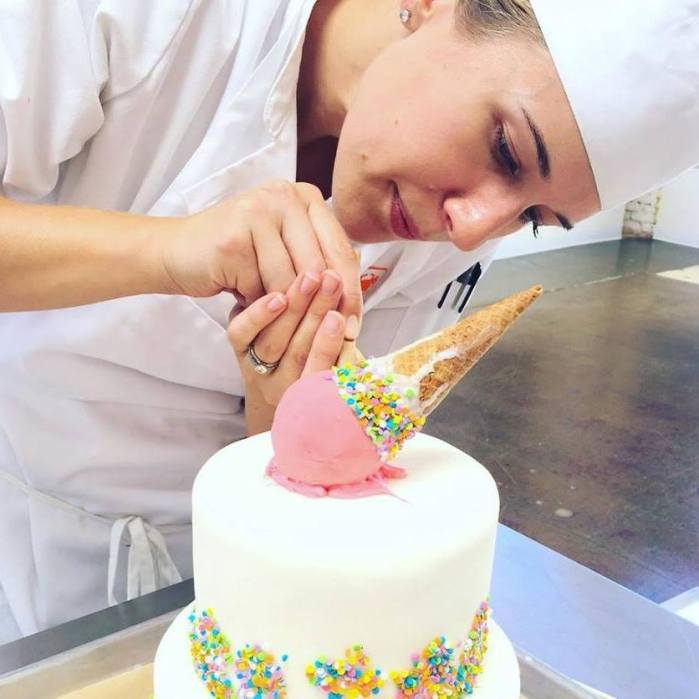 Weeks 4 and 5 of Pastry School have been all about Cakes – from an American childhood favorite to fancy-pants entremets – and finishing off Week 5 with our first Exam (1 of 3). We got to sift, bake, layer and decorate numerous styles of cakes, and did a few extra things in the middle of it all. There were guests, extra classes and lots of practice in the last couple weeks that kept me quite busy. Here’s a look back on the past two weeks, including the stress of our first exam. 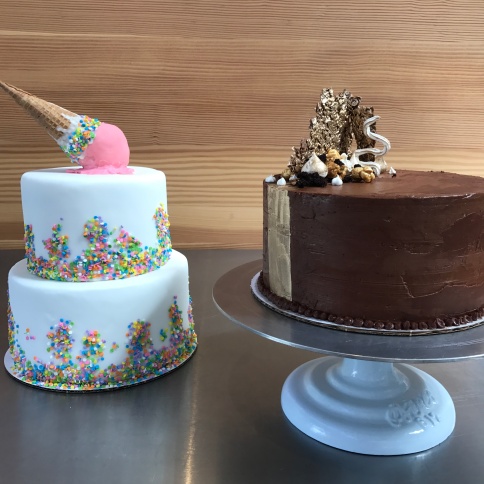 We spent two days in week 4 building and decorating layer cakes with guest chef Laci Sandoval. This was such a fun two days. The few days before we had baked a bunch of sheet cakes and 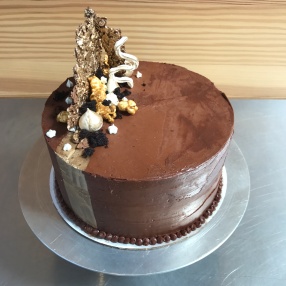 made lots of Italian Meringue Buttercream preparing for Laci’s visit with us. We made some vanilla bean cakes as well as a chocolate mayonnaise cake that is so moist and tasty (probably my favorite chocolate cake now), plus about 10 gallons worth of vanilla buttercream and several gallons of chocolate sour cream buttercream. Over the two days, we each decorated two cakes – a chocolate one with sticky caramel in the middle and a vanilla one with raspberry jam and buttercream. The vanilla one was covered in fondant and the other buttercream.

Conveniently, that weekend it was my best friend’s birthday and she was having a party, so I designed both my cakes with her in mind. I wanted them to be lighthearted, whimsical and really fun. For the vanilla one, I did a play on some recent cakes by Katherine Sabbath by doing 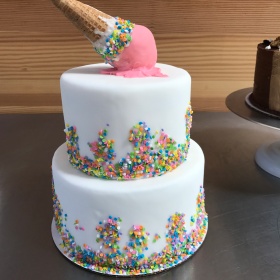 a ‘melting’ ice cream cone on top and funfetti.

For the chocolate one, I wanted to do a ‘messy’ design with lots of different funky toppings. I brought in a bunch of different sized meringues and used dried cake scraps, gold shimmer, feuilletine, and caramel corn to make a fun design on top. I love how both came out and really feel like it was the first time I successfully executed on a vision that I had in my head.

In the middle of Week 4, we go 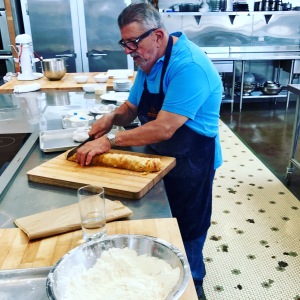 t the chance to hang out for baking legend Nick Malgieri and learn how to make authentic Viennese Apple Strudel. Before we learned from him, we all got to have lunch with him and chat. At one point he told us about the time he went to Julia Child’s house for cocktails. I was fascinated, and honored to be hanging out with him casually over some soup for lunch.

We spent the afternoon making both Apple Strudel and a Turkish Pistachio type strudel called Katmer. Nick stretched the dough thinner than paper – so thin you’d be sure it’d rip. Once rolled up, it bakes so crisp and light, nearly like phyllo dough. 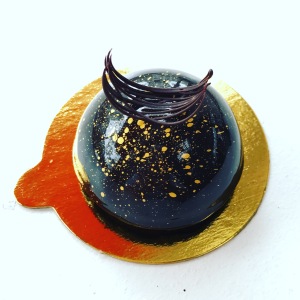 During week five, we put together a few different entremets and baked a bunch of financiers. Financiers are little cakes, often made with some sort of nut flour, that are named as such because they resembled bars of gold. I personally LOVE these cakes —the few times I’ve gone to Paris, I’ve had pistachio ones that I go crazy for. They are also a favorite because you can really do any flavor combo you can think of: sweet, savory, with toppings or without. We made Pistachio ones filled with chocolate ganache, brown rice, olive oil, almond and, my new favorite, caramelized onion with crème fraîche. 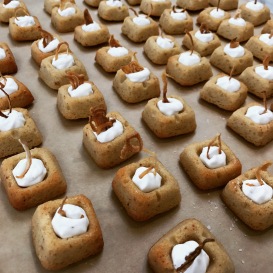 Then we turned to Entremets. Entremets are fancy, more contemporary desserts that are layered and use the freezer in order to achieve the look or layers that you’re going for. There are lots of components to these – glazes, mousses, cakes, caramels, fruit compotes, etc. We paired up and worked on one each over two days. The one that my group worked on was a Dulcey chocolate and strawberry entremet. It had a chocolate cake layer, two layers of mousse, crispy feuilletine, and covered with a dulcey glaze.

These are the types of cakes you see very delicately lined up in a refrigerator case at your favorite bakery, not the type of cake you just casually make on a Sunday afternoon. This was the first time I really felt like we were getting into the territory of true pastry chefs. Below are pictures of our Peanut Butter Gianduja desserts – peanut butter and milk chocolate mousse with a layer of crispy chocolate peanut butter crunch, decorated with mini whipped cream dallops, plum hibiscus jam and peanut crunch. The one below is our Dulcey with Strawberry.

The best part of making entremets was using a paint gun to spray chocolate all over our Peanut Butter Gianduja dessert. It’s the way pastry chefs get that velvety looking chocolate texture on desserts. Using the paint sprayer was about as much fun as you would think it would be, and even messier than you’d expect. The whole floor around us was covered with heavily cocoa buttered chocolate, which was super slippery, and the chocolate got all over everything. The result was awesome though, as you can see the texture on the picture below: 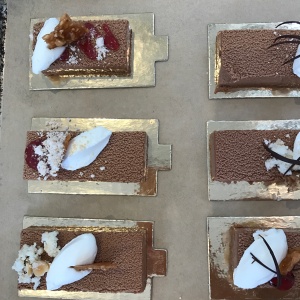 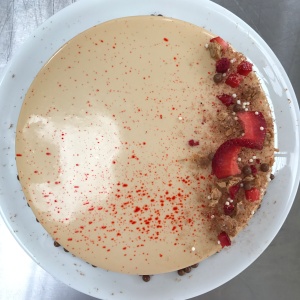 Holy shit. So, I’m a huge Top Chef fan. I’ve always been incredibly impressed with the quality of the food they seem to produce in such short amounts of time. Our first exam made me feel like I was smack in the middle of a quick fire challenge, with Padma threatening to tell me to pack my knives and go if I ended up on the bottom.

The exam consisted of an hour written portion and a three-hour practical, and we knew in advance we’d have to complete 5 or 6 tasks. All week we had been practicing different tasks that would possibly pop up on the exam, so the tasks weren’t a complete surprise.

I spent most nights that we reviewing concepts we’d learned and been quizzed on weekly, and did a lot of practice: pâte a choux, pastry cream, emulsifying chocolate, baking a cake, etc. Going into the exam, I felt ready. Once we started and had the list, I knew I would be able to successfully complete each in the amount of time we had.

However, I ran into a few issues – well, really, one annoying big issue. Devastatingly, my oven didn’t start preheating even though I specifically turned it on – perhaps I forgot to hit start though. Either way, I had a cake ready to go into the oven without an oven ready for it. Since this was my first task, this put me on tilt. I thought it could be ok given the cake had baking powder in it (which we learned, is double-acting and needs heat in order to have the second reaction). Once it was preheated, I got it in and carried on. It came out… bubbly? It didn’t rise as much as I would have liked, so I set it aside to remake if I had time.

The rest of the tasks were a breeze: dicing two carrots – easy; making two coronets – thanks to YouTube and practice, easy; pâte a choux dough piped into paris brest rings – easy enough, especially because I’ve been obsessed with making gougères lately; tempering chocolate – fine, just takes time and patience; and creme anglaise – something I used to be terrified of, but now easy with the fundamentals and a thermapen.

That damn cake though. I had enough time to remake it. And guess what? The second was WORST than the first: I forgot to cut the overhang of the parchment on one side (silly mistake), there were flour lumps (seriously, as if I’ve never mixed something), and I didn’t let it brown long enough. I composted it and sheepishly submitted my first one. UGH. That cake. I’m going to perfect that cake and will never ruin one again now, I just know it.

We’ll find out on Monday or Tuesday how we did. I feel pretty good about it and now know what to expect with the exams. The big lesson for me is to slow down. I’m really fast and that can create silly mistakes that are avoidable, especially when I had nearly forty minutes left. Breathe, calm down, and plan ahead, checking twice on the important details before moving forward. That’ll be my approach for the next one. 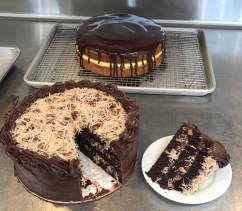 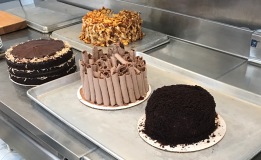