I grew up watching the Food Network – shows like East Meets West, Molto Mario and eventually Paula Deen before she was such a big deal and hot mess. The one thing I always wanted to know how to make right was the tender, flaky delicious biscuits that everyone on there seemingly had a recipe from a Grandmother for the world’s best biscuits. See, my grandmothers are not the type that have any secret recipes passed down generation to generation. Don’t get me wrong, they’ve got their signature dishes – my Grandma States’ “Hot Brown” Sandwich or my Grandma Johnson’s kitchen sink cookies – but they aren’t quintessential ones like a biscuit or fried chicken.

Every time I tried to remake a biscuit from the Food Network, they would come out hard as rocks! Where was the tenderness? What was I doing wrong? I was convinced that I’d be confined to a life of Pillsbury dough biscuits from those creepy canisters in the refrigerated section. Actually, scratch that – a life without biscuits because, let’s be honest, I would never be brave enough to open those scary cans myself.

It wasn’t until I really got into watching Alton Brown on Good Eats, eventually buying his books and reading his recipes and techniques online, that I really understood what it takes to make a mighty fine biscuit or scone. He really knows his stuff — not only teaching you the right way to do things, but the reasons (and the science!) behind why.

1. The fats and liquid should be very cold. To the point where you are getting the already cubed butter out of the refrigerator (or even freezer) when you are ready to incorporate it.

2. Everything should be weighed. If you haven’t yet, suck it up and buy a scale.

3. Less is so much more, especially when it comes to mixing. Don’t over mix. Don’t over pulse. Just barely incorporate. We’ll get into that more below.

This recipe, originally made and pictured with caramelized onions, is a fun take on biscuits and uses a buttermilk biscuit recipe. I am choosing to omit the onions from this version because, while the flavor of them was nice, the texture was just weird and stringy. I also feel like they overpowered the rest of the biscuit.

Recipe adapted from Joy the Baker:

Step One, Muster the Mushrooms:

Preheat the oven to 425 degrees while making the biscuits. 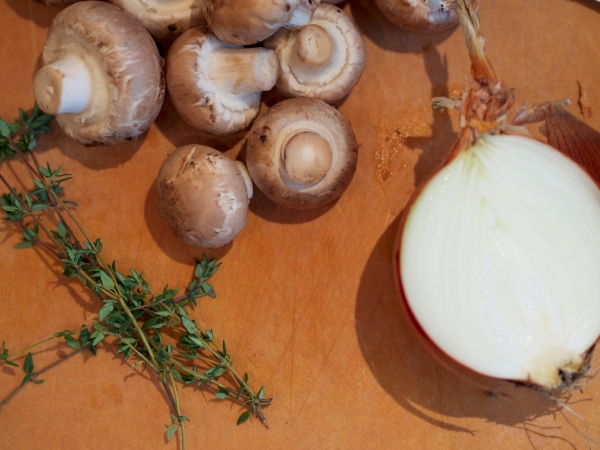 Heat olive oil and 1 tbsp butter in a medium pan over medium heat.  Add mushrooms and allow to cook until tender and golden brown, stirring occasionally.  Add a sprinkling of salt and pepper. Add thyme, balsamic vinegar, salt and pepper.  Set aside to cool.

In a mixing bowl or food processor, combine flour, sugar, baking powder, baking soda, and salt.  Cut or pulse in shortening and butter until mixture resembles coarse meal — this should be about 6-7 pulses if using a food processor.

In another bowl, combine egg and milk and beat lightly with a fork. If you were working with the flour mixture in a food processor, move it to a large bowl. Add the liquids to the flour mixture all at once, stirring enough to make a soft dough. Add the cooled mushroom, and blend together.

Turn out onto a floured board and knead gently a few times. Roll into a 1-inch thickness and cut into 2-inch rounds using a biscuit cutter or the top of a drinking glass. Reshape and roll dough to create more biscuits with excess scraps.

Place on an un-greased baking sheet, brush with egg wash and sprinkle with coarse sea salt. Bake at 425 degrees F for 12-15 minutes. Will last up to two days, but won’t be as good as when they come out of the oven.

One thought on “Mushroom and Thyme Buttermilk Biscuits”