I’ve been making a loaf or two of sourdough bread every weekend for about two months now. My starter has been going for a bit longer. None of my attempts have been blog worthy though, until now.

Living near San Francisco’s Tartine bakery, I know what amazing sourdough bread should taste like. It’s chewy, sour and salty in the middle, and crisp, dark crust on the outside. They’ve really mastered the art of bread there, so when I saw the Tartine Bakery book, I knew I had to learn from that.

I don’t have many pictures, because the loaf was, admittedly, not pretty on the outside. I was surprised to see how bubbly and chewy the inside was though! And the flavor – salty and sour, though I could have used more sour. This loaf was the closest I’ve come to sourdough as I know it.

Tartine style bread making is about time and tenderness. For this loaf, I took the mother starter and got a part of it out on Wednesday, for baking on Sunday. I fed it twice a day, every 12 hours with equal parts water and rye flour.

When it was time to start the dough, I followed the Basic Country loaf instructions. The two things I learned from this was a wet dough, while hard to manage, seems to produce better flavor and more bubbles and that you don’t need to knead the dough much at all, just let it rest A LOT. All in all, the dough rested for about six hours.

Another really important piece of bread making that I learned from this book is how to use a dutch oven to capture steam. Since home ovens aren’t steam injection ovens, it’s nearly impossible to get the right amount of moisture in the air. To fix that, the book suggests using a dutch oven with a lid, that you preheat in the oven for 20 minutes, then bake with the lid on for 20 more. After that, take the lid off and let the loaf bake for 10-15 minutes more to crisp up.

So here it is. I’m looking forward to many, many more loaves. I’m going to play around with the mixtures, the starters, the combination of flours.

In the mean time, here’s a BLTA made from the bread. Can’t wait to share more with you! 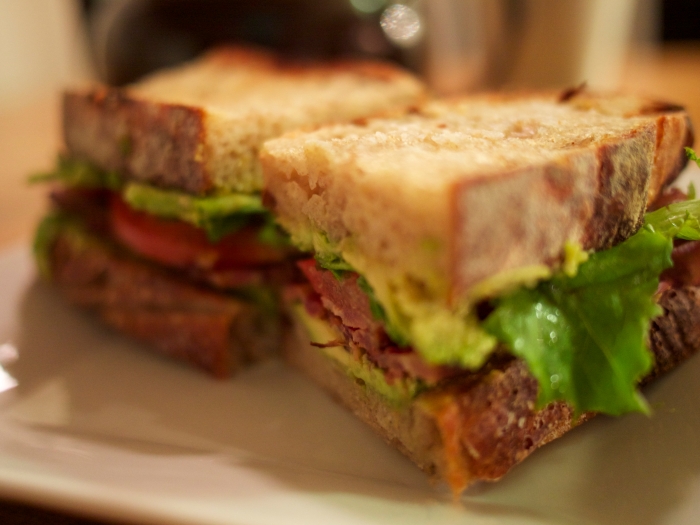