If you’re anything like me, you’re a carb-o-holic: bread, pasta, sweets – you name it, I’ll inhale it. The worst offender on my ‘binge-and-forget-the-diet’ list is the oft-loved bagel. Few people can resist a freshly toasted bagel, smeared with gobs of cream cheese, and I for one, can not.

I recently decided to try to cut out unnecessary refined carbs from my diet. However, since I’m being honest with myself, I knew that I wouldn’t be able to successfully cut out any sort of food from my diet, let alone carbs entirely. Thus, the caveat: anything homemade is fair game. That’s right – I can make all the pasta, bread, pizza I want, but I have to put in the energy. And blog about it!

This is my first attempt at a bagel. I started with a recipe I found on yummly, but decided against it because the amounts were not exact. I turned to the Bread Baker’s Apprentice (http://amzn.to/17i3R0), which has been my go-to for bread baking these last few months. Bagels get their chewy crust from a couple of different things: high gluten flour and malt. I used King Arthur Bread Flour, which has a higher gluten content than regular bread flour. Second, a type of malt (either powder, syrup, honey or brown sugar) is added to the dough to bring in some sweetness.

One of the major differences between New York and Montreal style bagels is the cooking method. The New York bagel, known for it’s chewier crust, is first boiled for a minute or two before going into a piping hot oven. That’s why you’ll often see huge vats of boiling water in bagel shops. The Montreal style, while also boiled, is cooked in a wood-fired oven. The bakers will use long, thin peels that allow them to get upwards of a dozen in and out at a time. Since my dream home is a long way away, I don’t have access to a wood-fired oven. Hence, the New York bagel. 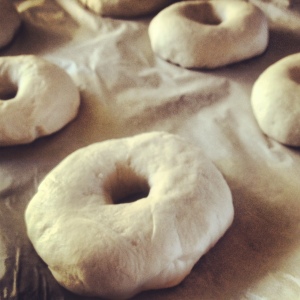 Once you boil, top with your choice of topping and bake, you’ll get something like this: 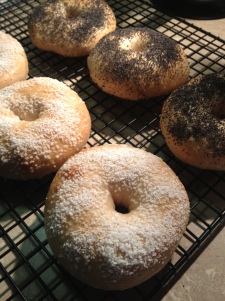 Combine the ingredients and mix until combined, like pancake batter. Let that sit, covered, for two hours.

Add the dough ingredients into the sponge. Just like a normal bread dough, you have to knead the dough for about 6 minutes, or until the internal temperature of the dough is about 77 degrees. Once you complete this step, you’re ready for shaping and resting.

I shaped the dough by cutting 4.5 ounce pieces from the main dough, rolling in a ball and then sticking a hole in the middle. Let them rest about 20 minutes and do a float test: dunk one of them in cold water and check to see that it floats within 10 seconds. If it doesn’t, it needs to rest more at room temperature. Once it passes the float test, they can begin retarding in the refrigerator over night.

Get the widest pot you have, fill with water and begin boiling. Meanwhile, turn your oven to 500 degrees. Once you have a hard boil, get your bagels out of the fridge and start boiling each one for 1-2 minutes on each side. I tried both times, and the 2 minute ones were much chewier and had a better overall texture. When you pull them out of the water, top with whatever makes you happy – I used poppy seeds and salt.

Next, put them in the middle of the oven and bake for 5 minutes. Then turn the pans 180 degrees, drop the temperature to 450 and bake another 5 minutes (or more, depending on how brown you want them). Remove, cool for 15 minutes and then smear with whatever your smear of choice is.